Clean energy, always available, without limit, without emissions. EXYTRON’s SmartEnergyTechnology and ZeroEmissionTechnology do not cause CO2 emissions, nitrogen oxides, particulate matter or methane slip. As decentralised energy supply systems with a high degree of self-sufficiency, they use only renewable energies and are unrivalled in their economic efficiency thanks to smart control and a degree of utilisation in excess of 90%. 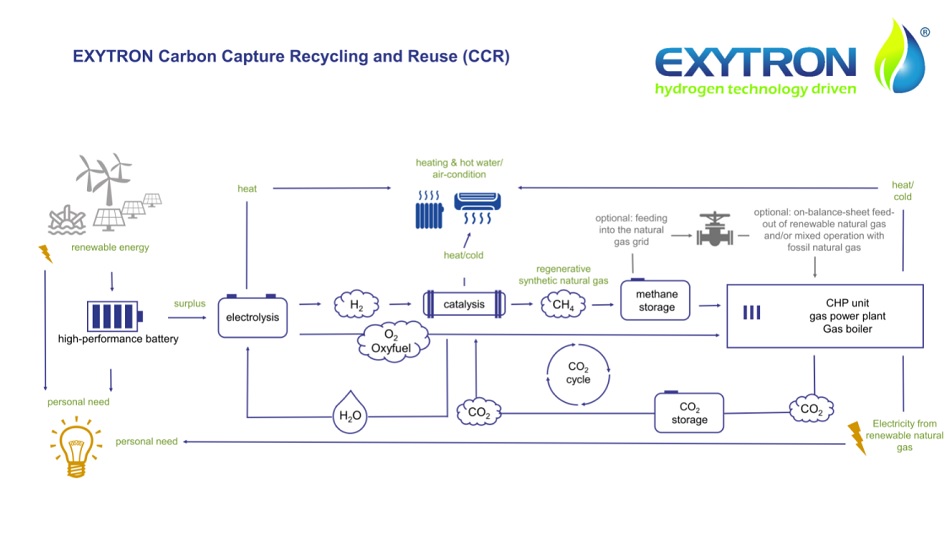 Functional principle of SmartEnergyTechnology with an overall efficiency (degree of utilisation) of renewable energies of over 90% through sector coupling.

EXYTRON’s patented energy supply system provides the user with renewable energy in the form of electricity, heating and cooling at all times, reliably covering individual requirements. The self-generated energy from PV or wind power plants is used 100% decentrally on site. The storage of large quantities of renewable electricity, which has been problematic in the past, is carried out by highly efficient power-to-gas and power-to-X systems. From hydrogen and carbon dioxide, EXYTRON catalysts produce regenerative, climate-neutral fuels such as methane (natural gas), liquefied petroleum gas, methanol, kerosene and green, non-fossil gases such as hydrogen, oxygen and carbon dioxide. In this way, energy is stored without limit and is reliably available in the event of a lull in the wind or darkness. Furthermore, the energy can be used e.g. for mobility and other industrial applications as climate-neutral fuels and gases.

At the heart of SmartEnergyTechnology is ZeroEmissionTechnology, which ensures emission-free combustion of the regenerative fuels produced in-house: The CO2 produced during combustion is not released into the environment, but is stored temporarily and used again and again as a necessary resource in a closed cycle for the production of fuels.

Hydrogen at its best

So-called “green hydrogen” has been produced for many years by electrolysis (the splitting of water into its components hydrogen and oxygen) with green electricity (hydroelectric plants, wind turbines, photovoltaic plants). However, due to its low energy density, the high safety requirements for the plants and the very high costs of the hydrogen technologies, as well as the non-existing infrastructure, it has not yet been able to establish itself on the market in pure form. EXYTRON has eliminated these disadvantages of hydrogen through the innovative direct conversion and refinement into methane and can thus use the well-known, low-cost and proven equipment from natural gas technology, e.g. commercially available CHP units, natural gas boilers, etc. This significantly reduces the costs and the safety requirements of the systems and, among other things, can also be used economically for the retrofitting of existing buildings. The complete execution of such an energy supply with pure hydrogen is about four to five times more expensive than the execution with the EXYTRON technology. In addition, the use of hydrogen alone may lead to acceptance problems among citizens due to the considerable risk of fire and explosion.

EXYTRON systems are almost infinitely scalable in size. In terms of building supply, residential complexes, commercial enterprises and even entire city quarters are in the planning stage. As early as 2017, planning also began for a unique project to supply an entire village, including a business park, and the additional production of renewable fuels, self-sufficiently and without emissions. The electrolysers, with a planned output of up to 20 MW, will use electricity from old wind turbines, among other things, whose alternative would have been demolition after the expiry of the feed-in tariff (EEG) in Germany after 20 years. Climate-neutral CO2 from biogas plants is used to produce the fuels, which would be emitted into the atmosphere without this use.

EXYTRON’s energy factories use these local and regional resources and generate sustainable electricity, heating and cooling as well as green, emission-neutral fuels and gases, e.g. for buses, heavy goods vehicles and ships, thus implementing the sector coupling of electricity, heating and mobility in an emission-free and climate-neutral way. It also produces other products such as non-fossil green gases. Later, the production of climate-neutral chemical base materials is also planned. At present, further energy factories are already in the concrete preliminary planning stage. There will be more information on this soon.

Conventional gas-fired power plants can also be retrofitted with EXYTRON technology and then operated emission-free.

Where can EXYTRON systems be used?

In the area of building supply (residential buildings, housing estates, quarters, commercial buildings, etc.) with SmartEnergyTechnology, there should be a minimum energy demand of about 200,000 kWh/a electricity and 400,000 kWh/a heat. In addition, there should be the possibility of installing or using existing PV and wind power plants with an annual production that at least matches the electricity demand. Smaller plants are technically possible, but the specific costs increase significantly the smaller a plant becomes due to the higher volume scaling required. There are no limits to the size of the plants, industrial parks and entire city quarters can be supplied. If you are planning a corresponding project, we are looking forward to your enquiry by telephone, or feel free to contact us via our Contact form.

Energy factories can be created where significant amounts of renewable energy are generated (e.g. wind and solar farms, as well as hydroelectric power plants) and consumers such as towns or commercial areas can be supplied in close proximity. If you know of possible locations or are planning corresponding energy supply projects, we would also be pleased to receive your Enquiries.